This recipe gives you a delicious combination of a quiche and breakfast sandwich all baked into one, and EVERY bite is like that. The cheese creates little puddles of goodness throughout the loaf and if you reheat a slice in an oven, toaster oven, or air fryer, the whole outside becomes a toasty cheesy shell and it’s ah-mazing. However, that is not the end to this beautiful piece of art, it also tastes freshly baked when reheated, like c’mon, how much better can this bread be??

Just interested in the recipe? Skip straight to it.

I don’t know about you all, but Derek and I have such a hard time coming up with breakfast ideas. We already have a smoothie every morning, but due to our schedules, our breakfast usually ends up being our main meal of the day and we don’t eat again until several hours later. We are also super bored of the normal oatmeal-cereal-yogurt-bagel-toast situation. So, in an attempt to get us a more filling but cheap breakfast I stumbled onto this idea, and I am in love. You can have what tastes like a full breakfast in one simple slice reheated and you don’t have to fuss with popping grease and an hour-long breakfast sandwich adventure first thing in the morning.

However, I would still love any breakfast suggestions you may have so we don’t tire ourselves of this beauty too quick. Let me know in the comments below what your go-to breakfast situation is!

Egg Replacement in this Recipe

If you are not egg free, then feel free to add 6 eggs in place of the cup of aquafaba. If you don’t like/can’t have/whatever aquafaba, then I recommend replacing it with chia seed eggs. You don’t want to replace the egg with oil because there is a lot of oil from the cheese, ham, and bacon, and your bread doesn’t need anymore. I also don’t recommend replacing the egg with yogurt because the bread doesn’t need any more moisture and yogurt will definitely make it a weird texture (I tried). Also, applesauce and banana just don’t belong in this bread. So, to replace the egg I have tried aquafaba, but I also think a chia egg would work fine too!

Aquafaba is the liquid that chickpeas/garbanzo beans (same thing) are canned in. For whatever reason, this liquid acts just like egg whites in baked recipes (however, they do not work on their own as an egg white, they will not cook up like that). So, often aquafaba is used to replace egg whites in delicate things like meringues! They even whip to a stiff peak (though they do take a bit longer than egg whites to get there). One can of garbanzo beans (in general) has close to a cup of liquid. Try to get something that isn’t flavored with anything or doesn’t have anything but garbanzo beans.

What Gluten-Free Flour to Use

I have tried this recipe with Bob’s Red Mill 1-to-1 Baking Flour and Great Value’s All Purpose GF Flour. I preferred the texture of the Great Value flour as there was no graininess and it didn’t noticeably affect the flavor. The Bob’s isn’t bad, but I do find it makes things a bit gritty. You should be able to use your preferred flour blend for baking as this recipe isn’t too picky and gets its rise from baking powder (meaning the absence of gluten isn’t too worrying like it is with other bread).

I would recommend using a flour blend that doesn’t have any rising agents already in it since the recipe calls for it. If your blend does have baking powder or soda, start by halving the baking powder in the recipe (I can’t really tell you what will work since every blend is different, but if it doesn’t rise well you may want to add more on your next try). If your blend has the normal rice flour, potato starch/flour, tapioca starch, and xantham gum (give or take a few other flours/ingredients), this recipe should work just fine for you!

Puddles of cheese with bits of bacon and ham baked into a delicious loaf that's perfect for breakfast!

Recipe adapted from Taste of Home.

Read directly above for other egg replacements (or how to use eggs in this recipe), information on what aquafaba is, and gluten-free flour suggestions.

If you don’t like ham you can replace all of it with bacon and vice versa.

1. Cook bacon. Preheat oven to 400°F. Cover a rimmed sheet pan with foil and place bacon strips on in one layer with space around them. Cook bacon in the preheated oven for 10-15 minutes just until the bacon is no longer ‘raw’ looking and is just starting to crisp (don’t let it get too crispy or it will be too hard in the bread). If you do not cook it ahead of time it will not become cooked in the bread and may be unpleasant.

2. Prepare ham and cheeses. While the bacon is cooking, cut the ham into small squares about as big as chocolate chips but no bigger than blueberries. If you have blocks of cheese, shred them now. Leave 20 grams of asiago off to the side to top the bread with later. You can put the cut ham and shredded cheeses all into one bowl together.

3. Prepare bacon. When the bacon is finished cooking, remove it from the oven and let sit for a moment to cool. Change oven temperature to 325°F. Once the bacon is cool enough to handle, place the bacon onto some paper towels to remove the excess grease. Cut the bacon into similar sized pieces as the ham.

4. Whip aquafaba. Place the aquafaba into the bowl of a stand mixer fitted with the paddle attachment (or use a hand mixer and medium-sized bowl). Mix the aquafaba on medium to medium-high speed until all of it has become foamy (about 2-3 minutes). The whole thing should be foamy and there shouldn’t be a ‘puddle’ of non-foamy aquafaba underneath.

6. Add milk. Add the milk into the aquafaba and mix for a few seconds just to combine.

7. Add in dry ingredients in batches. Add in a 1/3 of the dry ingredients at a time and mix well until fully blended before adding the next 1/3 of dry ingredients. Repeat this until all the dry ingredients are fully incorporated. Take a rubber spatula and thoroughly scrape the sides and bottom to release any flour hunks hiding. Mix the dough once more. The dough should look like cake batter and you should be able to see marks from where the paddle attachment hit the batter.

8. Add in remaining ingredients. Remove the paddle attachment and scrape off any dough. Add in all the cheese and meat into the dough (except the 20g of reserved asiago). Using a rubber spatula, fold in the ingredients until well combined (may take a moment and be sure to get all the way to the bottom).

9. Prepare loaf pan. Grease a 9″x5″ loaf pan lightly with butter. Carefully scoop finished dough into the loaf pan. Flatten the dough into the corners of the loaf pan using a rubber spatula. Take the edge of the spatula and run it around the top edge of loaf pan separating a bit of the dough from the sides and then smoothing it in toward the center. You are basically trying to create a small heap of dough in the center and pulling it away from the top edge slightly, this will help the bread rise and will give you a nicely shaped finished loaf. Wipe any excess dough from the side of the loaf pan with a paper towel. Here are some pictures as examples (sorry for the quality, they were taken with my phone): 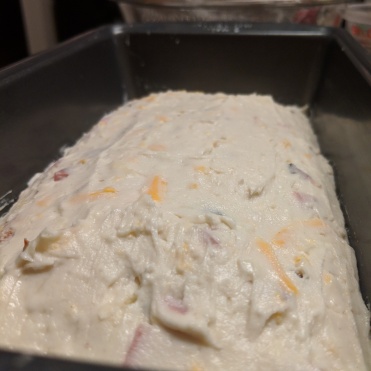 10. Bake! Bake the loaf in the oven for 55-65 minutes until a toothpick inserted comes out mostly clean (a few crumbs is fine, just not raw dough). Once it is done, sprinkle the top of the loaf with asiago cheese and place it back in the oven for three minutes (or under a broiler until the cheese is crispy and brown).

11. Allow loaf to cool. Once the cheese is all melted and browned, let the loaf cool in the loaf pan for 20-30 minutes. Once it is cool, place onto a cooling rack or piece of parchment paper until fully cooled.

12. Enjoy! Cut into the loaf once fully cooled and enjoy!

13. Storage and Reheating. Refrigerate all leftovers for up to 7-10 days in a Ziploc bag. Freeze the bread by slicing and placing a piece of wax paper between all slices before placing into a freezer Ziploc bag and freezing. Reheat bread in the oven, toaster oven, or air fryer (haven’t tried the microwave yet, sorry!). Do not reheat bread in the toaster as the cheese may muck it up.

That’s it! I hope you enjoy this as much as I did. Let me know in the comments below what some of your go-to breakfast items are! 🙂

Check out these other breakfast recipes: 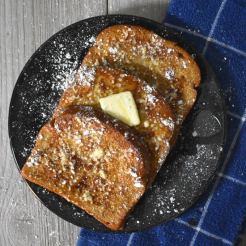 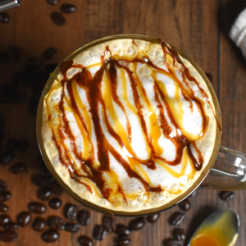 Thank you so much for stopping by and I hope you have a wonderful week! 🙂 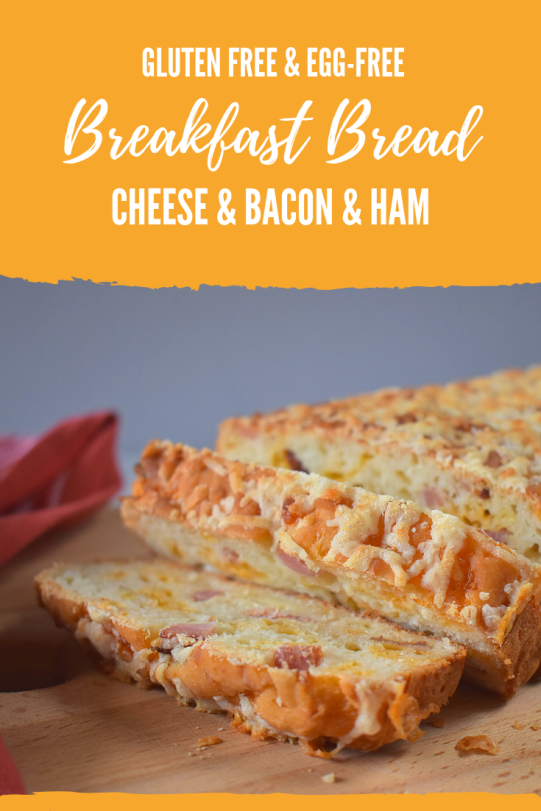