As most of you know, I am a self-declared Crazy Cat Lady in Training. I have always adored cats since a young age, even going so far as not wearing certain clothes unless it had some form of a cat on it (enter my mother and a tube of puff paint to get me out the door because my socks didn’t have a fluffy friend on them). Fast forward to now — Derek and I have four cats and he regularly has to remind me that the cats have plenty of toys and that they, in fact, do not miss me because we’ve only been gone for an hour.

Now that you have a clear image of just how close I am to getting my full Crazy Cat Lady credentials, let’s talk about this post. I wanted to share some of the cat DIYs I have done over the years and thought it would be fun to share our cats’ adoption stories first (plus, how can I pass up needlessly sharing cute kitten pictures…like c’mon). For the sake of making the posts nice and easy to read I’m going to split them up by each adoption in chronological order! Let’s start with Sammy and Oliver, out first pets.

We first saw Sammy and Oliver at a big box pet store and instantly fell in love. They looked scared and were cuddling tightly together. We found out that they were a ‘bonded pair’ which is a term that is used to describe animals that are so dependent on each other they usually can’t be separated. This meant that Sammy and Oliver had to be adopted as a pair. They were four months old at the time, which is a tricky time for rescues because that’s when cats really start to look like adult cats and don’t have that cute kitten floof and look to them. This makes them much harder to adopt out on top of already being a difficult case since they needed to be adopted as a bonded pair. I just want you to understand how utterly dire their situation was (this is me being super sarcastic 😉 ).

After adoring the kittens through the cage for a few minutes, we realized Oliver had a bad eye and Sammy had a bad ear. We later learned that these two came off a trailer park property where the man that owned the land refused to let any TNR (Trap Neuter Return) services or rescues in even though there were more than a hundred total cats in the area (and rapidly growing). It has been speculated that Sammy and Oliver were in catfights due to their young age and the feral nature of outdoor cats.

Once that man passed the rescues swooped in and saved dozens of kittens and cats and TNR-ed even more feral ones. Oliver was immediately taken to an eye specialist upon being rescued and fully recovered. He has had no issues since besides some visual impairments. After hearing their touching story, we decided we had to adopt them right then and there. 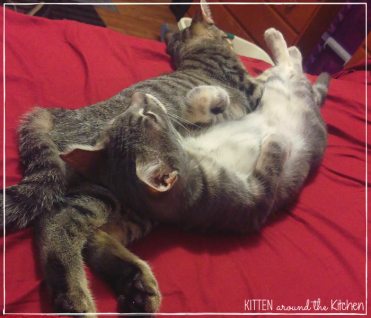 After buying everything we needed to start our long cat journey, we took them home. Now, we had just moved about a week before, so there were boxes and half set up things everywhere. Derek helped me get them into their new home but had to quickly leave for work. I decided I would set up the cat carrier in the living room and just let the cats out. I should mention that the living room was the main area we kept all of our boxes and pretty much the room we initially moved everything into, so it was a straight disaster. Immediately after opening the cat carrier, the cats were gone. Oh what an idiot I was. 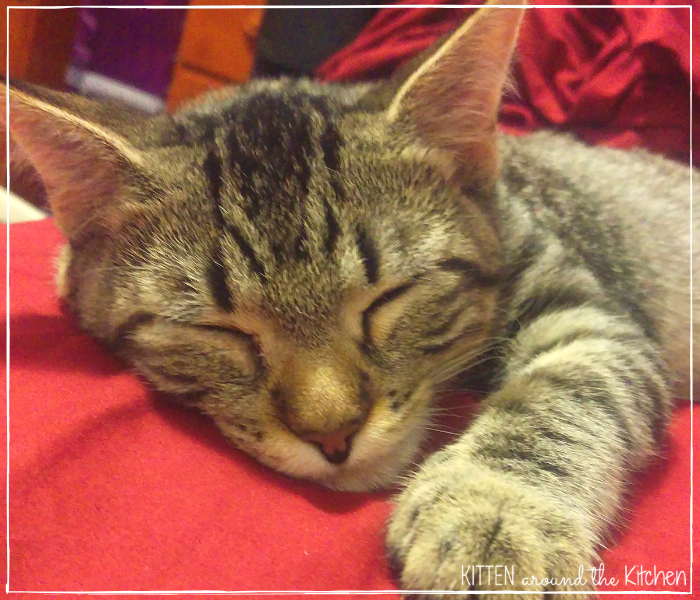 After what felt like an hour of me (a giant in their eyes) chasing and prodding them out from underneath and behind things, I finally got them into the nicely set up bedroom. They wanted nothing to do with me at this point. They were shy and scared from everything and especially didn’t love their change of environment. We let them hide under the bed for the first few days, but I decided to try some tough love. For 15 minutes each day, I would hold each of them and pet them, then let them scurry off. After two days of this, they immediately began to warm up to us, started sleeping with us, and wanting more affection. They eventually became huge cuddle bugs and let their stored up kitten energy reign free to destroy the house.

At first, Sammy and Oliver didn’t really act like cats. They never jumped onto our bed but instead choose to climb it with their claws much like ice pick climbing. Sometimes it would take upward of five minutes of furious climbing to surface at the top. This is how they got onto everything in the house. They also never really meowed. Oh how that would all change once we got Cal (story coming out on Wednesday).

Sammy and Oliver are still the most mellow and easy-going cats we have. They never get into much trouble and just want to be loved on for a little bit each day. Derek is Oliver’s favorite and often times he will love-bomb Derek in the kitchen by energetically rubbing all over Derek’s legs with his face and body. One thing Oliver does, that still surprises me to this day, is stand on his hind legs and stretch onto you while you are turned away. This effectively feels like someone is trying to grab your butt and it is especially terrifying when you’re home alone.

Sammy only loves me and hates nearly everything else in his sight (thank goodness he’s too lazy to do anything about it). He despises Derek and will let Derek pet him, but he really doesn’t look happy about it. Sammy is also obsessed with my hair and will often cuddle on top of it at night. If I click my tongue while leaning over and waving my hair he will come running and purr like crazy as he runs back and forth through it. We have no idea why he likes my hair so much, or when exactly the obsession started.

Sammy and Oliver still don’t meow much, but rather let out little squeaks or silent meows (where they give you the lovey eyes and open their mouth like they’re meowing, but nothing comes out). They love each other dearly and constantly have the other’s back. I am so happy we were able to keep them together and it has been so much fun watching two brothers grow up together.