We got Theo in May 2017 even though Derek and I had both decided we didn’t want to get any more pets…then we strolled past this idiot (that name is justified, you’ll see). The weeks leading up to Theo’s adoption, we had both fell in love with orange kittens. They were just too freaking cute!! But we decided we didn’t need to care for any more cats.

One fateful spring day we went to grab some cat toys and treats from a big box pet store and stopped by the adoption section to give the kitties some much-needed love. We saw a little orange kitty in the corner and he was just too cute. He immediately started being super cuddly and cute with us and it melted Derek’s heart. To be honest, I had my fill on cats and was perfectly okay to not adopt anymore, but Derek could not stop thinking about the little guy long after we left. He eventually convinced me and we decided to call and adopt him.

When we held and met him for the first time we didn’t really realize anything was wrong with him. He seemed normal but a little malnourished. He was not from the rescue we adopted our other cats from and was instead from the local pound. We didn’t have any sort of back story on him and we still don’t know his actual age. We got him home and quarantined him until he got used to us and we got him checked out by a vet. When we got him all settled into our rather large bathroom (it takes up about a third of our apartment and has a huge walk-in closet attached) we realized this cat ain’t right. 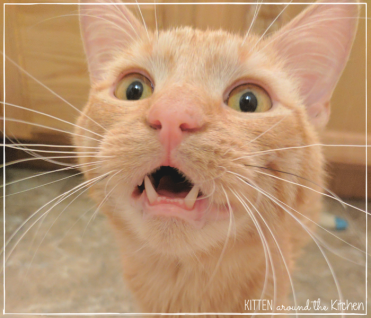 He would walk very weird, almost like he had never walked before, or maybe never walked on tile or blankets. It was very awkward and my heart started to hurt watching him walk around. We also believed he was mistreated, poorly cared for, and overlooked by the pound and the big box pet store we adopted from because he was very shakey, had uncoordinated movements, and seemed a little mentally not all there if y’know what I mean.

He really seemed like a desperate case at that point, but we were so ecstatic to get a new member of the family that we really didn’t worry too much about it. Derek slept in the bathroom with him (on lots of foam and it was really comfy, to be honest) to get bonded. I slept in the bathroom when we first adopted Cal (adoption story here) and he is now my little buddy, and Derek wanted the same thing.

We took him to the vet the next day and things went pretty badly. The vet believed Theo had FIP which is a really dangerous and deadly disease (from what the vet told us) and she wanted to do a bunch of expensive tests. She explained that with how malnourished he was and the weird ‘broken’ pattern and dullness of his coat he probably had FIP. She really stressed all the danger of the disease and made it very clear our other cats could get it and sort of made me feel like a bad pet parent for all of it stating several times we really shouldn’t bring a cat home unless it’s been vetted.

I started to cry thinking about what this little guy’s future looked like and how we needlessly put all our other cats in harm’s way. We got back to the car and I sobbed the whole way home. We came back a few days later to do one of the preliminary tests that were still expensive but would eliminate the need for the other really expensive test. The blood test came back perfectly fine. This is where the vet then launched into some other thing it could be and started to ramp up the dangers of that disease. Derek and I left as quick as we could. It became very clear this vet either wanted our money or was a kitty hypochondriac. I was very mad about that whole interaction. Also, his coat has never changed since we got him. It is still ‘broken’ and slightly dull compared to other cats, but I see orange kitties with the same type of coat ALL THE TIME!

We now had Theo for almost a week and still didn’t name him. We also still weren’t sure if he was going to make it and didn’t want to become too attached. We spent most of our free time with him in case that was all the time he had left. It became a really dark time for Derek and I as we continued to watch him not gain weight, struggle to eat and drink, and walk weirdly.

Then one day it’s like everything turned around. He started to drink more regularly, he would finish all his food without getting sick, he started to become interested in toys and he overall became more coordinated. This is also when we discovered he had learned from somewhere to open drawers and cabinets. We once woke up and found him laying in one of our pots. We eventually decided on the name Theo, Theodore for his full name, and he eventually met the other cats.

At first, Theo scared the other cats with his crazy eyes, weird uncoordinated movements, and sporadic bursts of energy. Theo and Cal are best friends and often play together and Cal gives Theo baths (the only reason Theo learned to clean himself).

Theo is still our little weird fluff ball to this day. He is still a little uncoordinated and doesn’t quite act like a ‘normal’ cat. In fact, most people we have over ask us if he is special needs or anything based on how he acts. He has become mostly socialized, but he will randomly get up and dart across the living room and then lay back down and take a nap scaring all the other cats and us in the process. He often smells like synthetic/plastic and we have no idea why. He loves everybody he meets and his purrs can be heard across the room. In fact, he will start purring when he is just walking up to get on your lap, like the thought of cuddles is enough to make him purr.

He will only play with toys that have a very specific type of crinkle sound, but when he does hear the crinkle his eyes become laser focused and his whole normal goofy demeanor changes into a toy killing machine. Theo loves to push his way underneath things and sleep for hours completely cocooned. We often have to check our bed and watch our step to prevent squishing him. He also has the weirdest meow. It sounds like he has been smoking for years and it still scares me when he sneaks up on me and meows. Theo is also famous for what we call ‘puddle kitty’ in which he just kind of goes limp while holding him or just in general when he sits or lays down it looks like he is a puddle melting into the floor. 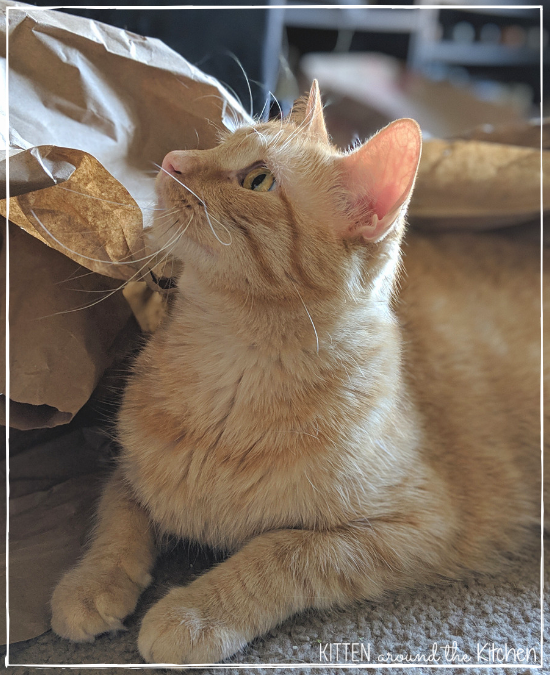 Theo loves Derek beyond anything I’ve seen a cat normally do. He is frantic for his attention and will sometimes stoop to a new low and choose to get cuddles from me (although we both know it’s not the same). Theo is definitely the most traumatic adoption experience we have gone through and we are so happy he is still with us and loving his forever home.

2 thoughts on “The Adoption Story – Theo”